Please enjoy our backlog of articles on career and job application success and if you haven't done so already sign up for upcoming articles that will support you flourishing in your career.

A cool hack for job interviews

For all of you who would like to be better at interviews here is a nice little hack that can have wider reaching benefits.

A Shift in Awareness

A curious thing to be aware of in job interviews, but one that you possibly don’t think much about, is the state of mind of those who are interviewing you.  As an interviewee you have your own angst and nerves that grow large in your own head, but what is going on for the panel members?  As they wait for you they too have increased levels of angst.  Theirs is not worry about how they are going to perform (although they can have a little of that), one of their big worry is you: how are going to perform and will they be able to help you if you don’t perform well.  As they wait for you the following types of questions swirl around in their head: “Will this person be OK?” “What if this person is too nervous?” “What will I do if this person is a dud?” And these thoughts put them in a slightly negative mindset.  Add to this an inherent suspicion of applicants that many interview panel members hold and there can be a slightly negative tone emanating from the panel.  Combine this with your fearful emotions and here we have a recipe for things to go wrong.

The most powerful thing you can do, at the beginning of an interview, is to care for the emotional health of your interviewers.  They need you to calm their anxious thoughts and put them in a good mood. Truly they do!  And you do this by creating an upward spiral of emotional contagion.  I will explain about how to do this in a moment, but first a little theory about the concept of emotional contagion.

Emotional contagion is a very strong and unconscious process that happens in people.  Because we have evolved to live in social groups it has been evolutionarily advantageous for us to develop the ability to read, and without conscious thought react, to the emotions of those around us, especially negative emotions.  In our hunter-gatherer tribe if one of our kin saw something that could be dangerous and felt fear it was useful if we learnt how to pick up on that fear very quickly and protect ourselves, even if we hadn’t seen the danger ourselves.  Consequently humans have become very good at having emotions ripple quickly through a group and we are super-human at catching others emotions, especially the survival emotions that are often dubbed the negative emotions – fear, anger, anxiety, regret, disgust.  In fact consistent research findings show that negative emotions are stronger than positive emotions by a factor of about 3 to 1.  That is negative emotions are 3 times more contagious than positive emotions. 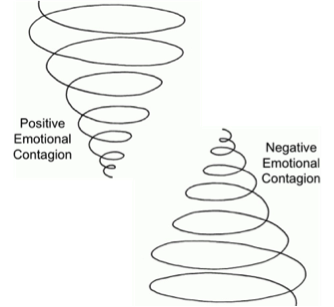 What this means for Interviews

What does this mean for you when you are being interviewed?  It means that your interviewers will very quickly pick up on and catch your negative emotions, especially because they are already holding slightly concerned emotions already.  This is not what you want.  Another psychological construct becomes heightened by negative emotions – confirmation bias.  People see and hear what they expect to see and hear because they unconsciously look for conformational evidence of what they think they should see.  In other words if they feel at all negative about you they will ignore good things about you and notice every tiny little thing you may do wrong – an ‘ummm’ before you answer a question, or a shift in eye contact, or a fiddling with your notes becomes confirmation that you are hiding something, or are not as good as you are saying you are so they should look harder for what is wrong with you – and hey presto, with confirmation bias they will find it.

Experiment with your Emotional Contagion

In subsequent articles I will talk about impression management, making a positive first impression and planning on being at your best, for now explore this topic a little more by monitoring and watching what happens to your emotions when you enter a room, or join a group.  The more awareness you have of emotional contagion the more you can influence its impact on you.

One final thought.  Emotional contagion doesn’t just happen in interviews – it happens wherever people group together (even a group of 2 people).  Try using emotional contagion to create positive groups.  For example in your next meeting start the agenda with a positive item not a problem.

It is a pleasure to share these articles with you.  Make sure your friends and colleagues don't miss out forward this article along and encourage others to sign up for articles of their own via this link.

Previous | Next
Return to the blog index

Feedback from readers is that these articles have been invaluable for sparking career rejuvenation.